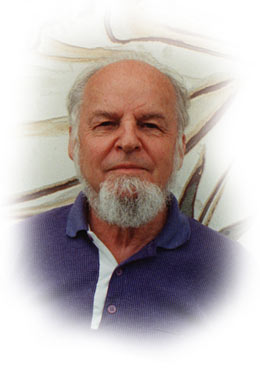 Heinz Gaugel was born in 1927 in the village of Eybach in the Swabian Alps region of southern Germany. A self-taught artist, Heinz moved to Canada in 1951 where he began his artistic career. His works include oils on canvas, ceramics, stained glass, fresco, sgraffito and other varied techniques. He created monumental works in churches, public spaces and private buildings. Behalt, a 10 ft x 265 ft cyclorama depicting the history of the Amish, Mennonites and Hutterites, is located at the Amish & Mennonite Heritage Center.

In 1962, Heinz Gaugel entered Holmes County, Ohio, for his first time. Heinz was in search of glazed brick for a mural he was working on in Ontario, Canada. He was en-route to Columbus, Ohio, and passed through this region on US Highway 62 when he encountered the Amish culture and their German dialect for the first time. Heinz moved onto a farm in Holmes County in 1972 to work on various art projects in the area.

Tourism was on the rise in Holmes County, causing some members of the Amish and Mennonite faith much frustration. On a warm summer day in 1978, an Amish blacksmith related to Heinz his frustration with the constant questions of tourists. “I wish there was some place that people could go and find out about why we live the way we do,” the blacksmith said. Seeing both a need and an opportunity, Heinz said “Brother, tomorrow I will begin working towards that goal.” He committed himself to painting a cyclorama (a mural in-the-round) depicting the history of the Anabaptists (meaning literally “baptizers again”), and engaged in detailed historical research towards that end. 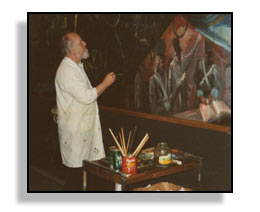 Behalt: In the meantime, awareness of Heinz’s project grew among Amish and Mennonites of the local area. Some were concerned whether accurate information was being depicted about Anabaptists. Others were convinced that Gaugel’s mural needed to remain in Mennonite hands and used to tell the Anabaptist story, rather than private businesses using it for profit.

In 1988, the Mennonite Information Center (the predecessor name of the Amish & Mennonite Heritage Center) purchased Heinz Gaugel’s painting with about 100 feet of the painting completed. The center agreed to construct a special Mural Hall to house the painting, and the artist committed to complete the painting. Ground was broken on March 1989, and the unfinished mural was moved into the hall that fall.

Visitors were able to watch Heinz paint until October 1992, when he signed his name on the completed mural. He entitled it “Behalt,” from the German word “behalten,” meaning “to keep” or “to remember.” The artist continued to paint in his studio at the center until the winter of 2000 when he passed away at the age of 73.

The mural itself is enormous — 265 feet wide and 10 feet tall. Its vivid colors and sweeping lines are stunning and overwhelming. Certain colors dominate various historical periods: reds for times of persecution, blues and greens for times of greater peace and tolerance. More than one visitor has compared it to the work of Michelangelo, thus earning the nickname “the Sistine Chapel of the Amish and Mennonites.” 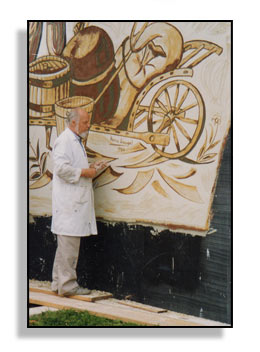 Sgraffito: After completing Behalt, Heinz took on another artistic project in an unusual form. In the summer of 1993, the artist created “Immigrants’ Arrival in the New World” in sgraffito on an exterior wall of the Mural Hall. Sgraffito, meaning “scratched,” is a technique of reverse art in which layers of contrasting colored plaster are applied to a surface; the design is achieved by scratching to produce an outline drawing. The scene depicts Swiss and German immigrants arriving with chests, kegs, and basic tools ready to pursue visions of new life in a new land. The artistic technique was used in Heinz’s native Germany since the 13th century, but seldom has appeared in North America.

Behalt receives thousands of visitors each year from every state and many overseas countries. For a small fee visitors may take a 30-minute guided tour to hear the heartwarming story of the Amish and Mennonites—people who refused to give up their religious convictions despite intense persecution. Visitors get more than history and an understanding of the plain people. Many come out of the mural hall visibly moved. It is designed both to tell the story of a culture and to interpret their spiritual heritage.

Other Works by Heinz Gaugel

To accurately inform visitors about the faith, culture and lifestyle of the Amish, Mennonite and Hutterite peoples. Continue Reading ...